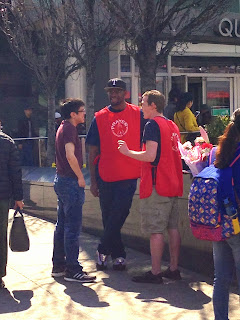 A friend of ours named Audley joined us for his first prayer station several weeks ago and he had a pretty incredible encounter out on the street. He met a man named John who seemed to have a heavy heart. John began to explain his situation to Audley and said that he was having a lot of problems with his marriage. He is an American but his wife is from Ethiopia. The cultural differences have been causing a lot of tension, and to make things worse, she has been struggling with suicidal thoughts.

While he was sharing, Audley interrupted him in the middle of his sentences and asked him, “Do you know a girl named Krystal?” John took a step back, surprised by his question and said, “Yes, I do.” Audley followed up by asking, “Is she a short black girl?” John said, “Yeah… actually she is.” Audley said, “You’re never going to believe this, but my friend Krystal has been telling me to pray for her friend named John, who's been having trouble with his marriage because his wife is from Ethiopia!” It turns out that Audley and John had a mutual friend who had been telling Audley to pray for John. That day Audley actually got to meet the man that he was praying for on the streets! It was a God thing.

John was blown away and said, “Wow, there are millions of people in this city and you just so happened to meet me out here today.” Audley said, “Yep, God must be up to something!” Audley ministered powerfully to John that day and, when he left, he said; “Now I have something to smile about.”

Posted by Street Life Ministries at 12:33 PM No comments: 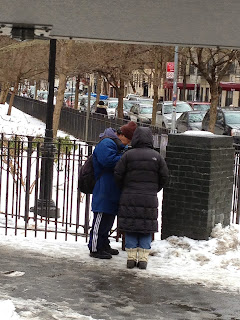 Yesterday I had the chance to speak with René again.  He is doing very well other than he may need another surgery on his knee.  It’s been four months since his last drink!  I also found out he is friends with another brother in the Lord, Otilio, in whose life God has brought about great transformation.  I had the pleasure of learning Otilio’s testimony several years ago.  This is wonderful to hear that René has other Godly influences in his life.  He no longer hangs around the guys that were a bad influence in his life.  He has been attending various churches several times a week and would like to find a church he can stay at.  King’s Fellowship is far for him, especially with his leg, though he would like to come.  It was very humbling when he said I’m the first one of his Christian friends for whom he prays.  Yesterday he shared with me how he can picture the Words from the Bible when he reads them.  God has been giving him revelation of His Word.  Lastly, René requested prayer.  He is so hungry for it and believes in its power.  What an amazing story of God’s continuing grace in René’s life!
Posted by Street Life Ministries at 12:31 PM No comments: 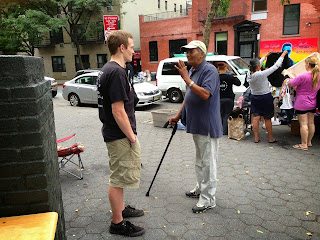 Joseph is a homeless man who is usually closed off to conversation about the gospel, but this week things were different. He came to the park lamenting about his living situation and began his usual rant about how nobody can really know God. Ryan reassured him that this was not true, and that the whole reason Jesus came to earth was to reveal who God is and to make reconciliation with God possible. As the discussion continued, Ryan also let Joseph know that, not only is it possible to know God, but that God already knows us completely. He shared about how Jesus spent portions of his life as a homeless man (even without a bed to sleep on) and that Jesus had seen every moment of Joseph's life and could relate with his current situation. Joseph had never heard these things about Jesus before, and by the end of the conversation his attitude had changed and he was very grateful for the talk.

We've been praying for Joseph a lot lately. It looks like God is beginning to open the door for the gospel in his life!

Posted by Street Life Ministries at 12:25 PM No comments: