Seeing Beyond the Sin 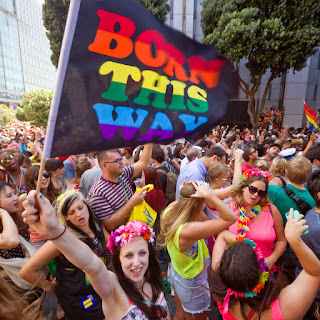 To be honest, I haven't always looked forward to the Gay Pride Parade Outreach. Sometimes I've even dreaded it. Don't get me wrong,  I completely believe in what we’re doing and why we’re there, but the biggest challenge for me has been being able to look beyond the sin and the "homosexual" label to just see the people. But this year, that changed for me. This year I saw the PEOPLE. It sounds obvious, but it was hard to get past what I didn't understand.

Our prayer walk prior to the parade was key in helping me see things differently. My prayer partner prayed how this outreach is about the people. This became a recurring theme throughout our walk, and when we arrived at the festival the next day, I recognized that something had shifted in me. After the first few surveys, I realized I wasn't feeling as awkward as I had felt in years past. I had a new confidence, and I wasn't afraid of the people we were talking to. Instead of thinking to myself, "Oh, I'm talking to a lesbian." I had a genuine interest in the person and what they had to say - even if I disagreed.

There were some moments where I felt my love was recognizable to the people. Instead of being afraid or repulsed, I smiled and was able to look them in the face. The parade is always filled with a lot of vulgarity and immodesty, but instead of being disgusted with them, I was able to see beyond that and see the person. Since the outreach, I cannot seem to escape the image of the crowds of people walking by and how each one of them needs to know what Jesus had done for them. This is why we go to reach them where they are.
Posted by Street Life Ministries at 7:46 AM 2 comments:

"I was the Answer to His Prayer"

"I was the Answer to His Prayer"

He was drunk, but the music seemed to draw him in. He couldn't help but hear our worship since we were set up right across from his home, the street corner where he slept at night. The lyrics took him back to his childhood and the days he spent in Church. Our songs reawakened him to all that he learned about God, but he was simultaneously beginning to feel a lot of guilt and shame. Regardless of his experience in the Church, the present reality was this: He was living on the streets drinking away his sorrows. How could he come back to God after having strayed so far? How could He attend Church again after all this time in sin?

These were the questions that troubled his mind as the worship began to prick his conscious. I comforted him and reassured him he was welcome to be there with us. "This is church on the streets right now, my friend. Your brokenness is what makes you welcome here with us." I had him stay and watch the dramas. Afterwards, I reminded him about the cross and the prodigal son, and urged him to trust that God's love was strong enough to forgive even the backslider. 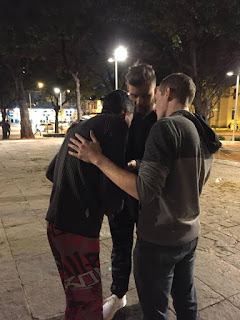 As we spoke, he interrupted me and started shouting, "God doesn't hear my prayers! God doesn't hear my prayers!" I grabbed him by the shoulders, looked him straight in the eye and said, "Listen to me. The fact that God has called me here to Brazil and led us to come to this specific street corner tonight so that I could remind you of the gospel is proof that God has heard your prayers, and not only that - He is answering your prayers right now. This conversation is the answer to your prayers!" After that, he was silenced. He bowed his head and just began to weep uncontrollably. As he wept, I too was amazed at what just took place, and it began to sink in... I was the answer to his prayer. It's amazing how God positions us so that He can reach others through us!

He did not give his life to the Lord that night, but once thing was clear, God wanted me there that night to interrupt his unbelief and remind him of the gospel of grace.
Posted by Street Life Ministries at 12:05 PM No comments: