"Why haven't you asked for money yet?" 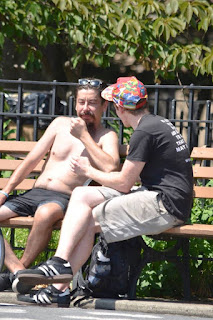 As soon as I saw him, I knew God wanted me to speak with him. He sat down on the bench across from the worship band, and watched very intently as we set up the music gear. Before we started our first set, I approached him and said, "What brings you out here today?"

"Oh, just enjoying the weather." He said. "You guys are playing some music?"

I replied, "We sure are!" When he asked why, I explained that we come out to worship Jesus in public places because he is worthy of our praise. He began to explain the confusion he's had about all the different world religions. He had tried to make sense of it all but couldn't, and he eventually settled into a frustrated agnosticism. We talked for a while about why I follow Jesus instead of other world religions and we continued to talk between each worship set the entire day.

After our third or fourth talk, I wondered if I was getting through to him. But everything changed when I sat down with him the last time. He asked, "Why haven't you guys asked for money yet? You guys don't even have a place for people to put money as they walk by like most street musicians do."

I smiled at him and said, "We haven't asked for money because we aren't out here for money."

"Well then why are you out here?" He asked.


This gave me the opportunity to explain that my motive was purely to praise Jesus and to share Jesus  with the people at the park. As someone who ran a very successful business, it was hard for him to process how we could do all of this work without asking for money. It really rocked him. He was humbled by what we were doing. I just continued to explain that this is the Love of God that he was witnessing at the park, and that he could also know this love if he turned and followed Jesus.
Posted by Street Life Ministries at 1:35 PM No comments:

The parks in New York City are just teeming with children! During Worship Warfare Week, these kids are a significant focus of our ministry. Our time spent with them often opens up opportunities to minister to the parents, who would otherwise take no interest us. As Hannah from the New Hampshire team told us, "I loved to watch the parents as we interacted with the kids. There was a lady at the third park who came to have her kids' faces painted but she stood at a distance, watching with a skeptical look and her arms crossed. After painting their faces, I sat down and drew chalk pictures with her kids. They loved it! Her face began to soften and eventually I was able to talk with her about her kids, their talents and aspirations. Eventually they left, but about an hour later they showed up again. She said her kids had such a good time with us that she had to bring them back. This time I sat with them just blowing bubbles and laughing. The mom stood and watched, but this time she had a smile on her face. It was cool to see that I was able to minister to her by loving her kids and spending time with them."

Posted by Street Life Ministries at 1:33 PM No comments: