Today, at the Prayer Station, I met a man named Tommy. The moment he walked up to me, I could tell he was deeply troubled. He earnestly requested prayer and when we asked him the reason for his request he began to explain why he was so anxious and distraught. Tommy was on his way to see his probation officer, whom he hadn't seen in months (we got the impression that he had missed several appointments), and he was expecting to hear some bad news... that he would be going back to jail. Obviously, I couldn't do anything to keep that from happening, but we put it in God's hands and prayed that God would see that Tommy wanted to change and he wanted to be a good father who was there for his kids. A Few hours later, Tommy came back. He came right up to me, shook my hand and said, "I'm going home! I'll be home for New Year's" He was ecstatic. We congratulated Tommy and gave him a big hug. That experience was amazing, and I'm very thankful I got to have it! 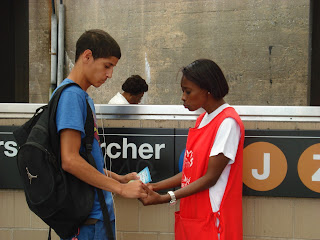 Hopefully this fresh touch of mercy will transform Tommy's life
and lead him to overflow with thanksgiving to God.
Posted by Street Life Ministries at 11:27 AM No comments: