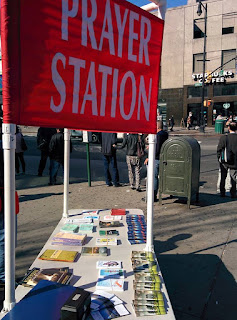 Recently at the Flushing Prayer Station we met a woman who once was a devout Muslim.  Fifteen years ago she began to seek God, wanting to know who he really is.  After looking into other religions, she decided to read the Bible.  “I’m going to read the red words because those words are the words of Christ!” is what she thought to herself.  His Words came alive to her.  At one point, she felt something like liquid flowing over her as she was reading and praying.  Eventually she gave her life to Jesus after a journey that took over a year.

She has experienced many difficulties for converting from Islam to Christianity.  Although these trials were difficult to face, she would do it all over again because Jesus is worth any pain and persecution! There was such a light and joy in her eyes as she recounted all that Jesus had done and continues to do in her and other people’s lives.  Sadly her husband, also a Muslim, chose to leave her and her two children.  Her kids are being raised in the ways of the Lord.

In fact, she felt the Lord leading her to go to Philadelphia to minister to people.  She brought both of her kids.  There were a number of people she had a chance to encourage and tell about Jesus.  She encouraged us in our outreach and recounted how the Lord had placed it on her heart to go and witness in downtown Flushing.

Meeting her was a testimony of the many prayers going up for Muslims around the world that they would have an encounter with the Living Christ.  Many Muslims are closed off to hearing the Gospel or are in closed nations where preaching the Gospel is not allowed.  Our prayers make a difference in seeing them come to the Lord.  For this woman, a formerly devoted Muslim, if someone had tried to talk about Jesus with her, she most likely would not have listened.  But the Lord met her anyways.  Therefore we can be encouraged to share the Gospel with Muslims and if they don’t receive it, prayer has a powerful impact.

Posted by Street Life Ministries at 8:13 AM No comments: 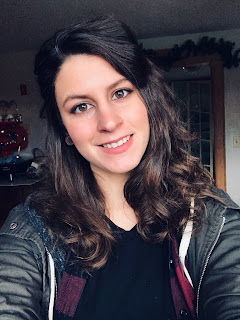 My name is Emily Angelucci and I am a student at Northpoint Bible College located in Haverhill, Massachusetts. I am interning with Street LIFE Ministries this summer for my senior missions internship. As I prayed about where to intern for this summer, God placed New York City on my heart through dreams and confirmations.  However He did not give me a specific ministry. Eventually I had to take a step of faith when no further direction came, so I searched on the internet for missions internships in NYC.

After reading through a few opportunities I came across Street LIFE Ministries. What drew me to them was their expression of their heart for serving the many different people of NYC.  Also I noticed their genuine desire to see those who join their team to not only be equipped for outreach and service, but also to grow in their relationship with God. As I prayed further about this opportunity, God gave me an unshakeable sense that this internship would be where a true deepening of my relationship with Him would take place.

It is the start of my third week here and I can attest to already seeing the first fruits of this deepening taking place! From the outreach on the streets to the community living and fellowship, God has been using each moment to engrave his priorities of servanthood, humility and love upon my heart. I know I will be eternally grateful for following the call of God to come and serve at Street LIFE Ministries in NYC and I can’t wait to see what the rest of the summer holds for us!
Posted by Street Life Ministries at 8:11 AM 1 comment: